As the Kunos Simulazioni team announced last Friday, they had a surprise announcement prepared scheduled for today.
Many of the fans, started speculating what the big announcement might be. Next to AI, or multiplayer, the Nordschleife announcement, was one of the most awaited features.
And now we know  the outcome.

The most famous automotive proving ground in the world will become part of the Assetto Corsa simulator. Not just a regular game version, but a track model build upon a real world laser scan.
For years now, the discussion about having a laser scanned  Sim Racing version of the ” Green Hell” has been a hot topic.

Two years ago Kunos Simulazioni already had plans to include the famous Ring in the Assetto Corsa platform, but the financial troubles of the track had put all licenses on hold. Now two years later, its finally goin to happen. The German track that is best known for its ADAC Zurich 24-hour race, which is held on both the Nordschleife and the Grand Prix circuit with up to 800 amateurs and professionals and up to 200 cars on track , will become a virtual reality.

The Nurburgring-Nordschleife. The greatest track of all time, challenging drivers for over 60 years and now challenging you in Assetto Corsa.

The Nurburing-Nordschleife will be an official addition to Assetto Corsa, which is being heralded as one of the most appreciated racing simulations of 2013. We will be bringing you the most faithful virtual representation of the track ever to be released, based on our laser scanning technology.

This license underpins the ambition of the Assetto Corsa team and we will be shortly beholding a survey to gather your thoughts with a view to releasing the track in September 2014.

We want to go further however! We are developing a ‘Dream Pack DLC’ featuring not only the Nordschleife, but 10 cars, chosen by you, the community, to be included in the pack. So take your pick, Alfa Romeo? Nissan? McLaren and much more.

Soon after the release of Assetto Corsa v.1.0 final, we will be opening our 1 month pre-order phase, providing you with a 50% saving on the final package – that’s right, 10 cars and the Nordschleife.

To stay in touch with our news on when the pre-order will start, keep cheking on our website, follow us on www.facebook.com/assetto.corsaand on www.twitter.com/@ac_assettocorsa or simply check the ingame news!

We hope that with this announcement you will have an even Happier New Year.

Also, Assetto Corsa will allow for considerable customisation and modification, in order to satisfy the expectations of professional sim racers, gamers who prefer to approach the driving experience more progressively, and hobbyists who just like to collect lots of cars and tracks. 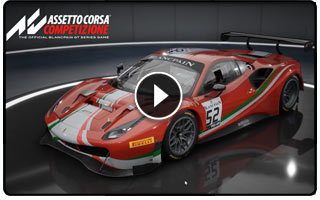