Last week, the well-known German Sim Racing peripheral manufacturer Fanatec hosted a community event were selected community members were invited to test and compare the new Fanatec Podium Series Direct Drive wheels to various comparable solutions on the market. Mark Puc aka AussieStig was on the scene and now shares his report of the event.

Saturday, August 25th, Landshut, Germany, I was among the invitees to attend FANATEC’s 20th-year celebrations and their Podium community event. In attendance were a mix of a who’s who of sim racing, VIP guests, and family.

Some of the guests included members of sim racing team, Team Redline, Thomas’s family and well-known sim racing personalities such as Matt Malone and Gamer Muscle himself. Upon arrival at the sim racing themed aircraft hangar in Landshut, all sim racing guests received a VIP Tester lanyard. For some obscure reason, Gamer Muscle had two lanyards dangling around his neck, apparently, he was an extra special VIP. Almost immediately Dominic Brennan, one of the organizers of the event, directed me to the first of two test benches where all of us could sample four different wheelbases.

Note: the Podium bases were not production versions but rather pre-production products. The comparisons are therefore based on what was available to us during the event.

The bases were set up side by side on a large bench constructed mainly of aluminum profile and wood.

During both test benches, we drove the Ferrari 488 GT3 in Assetto Corsa, (auto tranny, no sound) on the Nurburgring GP layout.

Test bench 1 began with the CSW v2.5, Accuforce v2, SimRacingBay Simucube Small Mige OSW finally ending with the Podium DD1. Moving from left to right, we drove each base for approximately 5 minutes. I was told the wheels were set up in such a way to provide equal amounts of torque/power and detail. Naturally, this was meant to be within the context of each base’s capabilities.

Getting down to business and starting with the CSW v2.5, which, I could only surmise, was there to demonstrate the jump from belt driven to direct drive technology. The CSW had a familiar feel and felt a little out of its depth after driving the remaining three bases.

Progressing along the bench, the Accuforce lacked crispness, displayed some pervasive graininess and a little cogging whilst cornering. Next, the OSW. It felt immediately more responsive than the Accuforce with a good level of detail and power. Lastly the Podium DD1; it certainly had the power and torque covered when compared to the previous two, although I experienced some very slight cogging and in my view, slightly less detail than the OSW base.

After a couple of stints in the Rennsport simulators equipped with the DD1 and DD2 wheelbases, it was time for test bench 2. Starting with the Bodnar Sim Steering 2, SimRacingBay Simucube Large Mige OSW, Podium DD1 and lastly, the Podium DD2 we once again, moved from left to right as we drove each base for approximately 5 minutes. It should be no surprise, the amount of power and torque all these wheelbases can produce is wrist snapping.

The short answer here after driving all four bases is I preferred the Bodnar base with the OSW and DD2 coming a not too distant second and third respectively. The DD1 with its torque setting turned up had a little less fidelity and finished fourth for me. There really wasn’t much in it, to be honest.

All wheelbases demonstrated an overabundance of torque and power, so much so, it could be seen as overkill. It was interesting to observe people not really accustomed to such equipment struggling to wrestle a car around the Nurburgring GP circuit.

The point of the tests was to demonstrate the output of the wheelbases and where they stand in a direct back to back comparison.

I can see the benefit of having this level of torque available, should a sim racer want or need it. On the other hand, the bases were almost overwhelming. I found myself questioning the need for this amount of power. In this context, the fidelity side of the equation may mean more to me than sheer power alone. Hopping into the Rennsport simulators, I was able to drive multiple laps using a selection of cars and circuits in both AC and iRacing.

Going straight for my favorite driving style, I wanted to see how the DD1 handled the Lotus 79 at Brands Hatch in iRacing. Using the H-shifter plus heel and toe driving, I drove consistent laps and found I could place the car with reasonable accuracy during the stint. Feedback and turn in in-game were good, with torque set to 75%, the DD1 gave me a decent workout.

Switching to the DD2, torque set to 80%, I sampled an Indy car at the Indianapolis Oval layout. Fidelity and feedback on the oval circuit were as expected. Turning left with only a brief straight in-between did not really demonstrate the capacity of the wheelbase. This stint to me was more about fidelity and road effects which were accurately transmitted to my hands.

The last car and title I drove using a DD1 base was the McLaren GT3 in AC at Imola. Turn in was crisp and the tyre load going into the corners was impressive. I went for it and set the torque to 100% in-game. In doing this, I did miss some fidelity. As in the bench tests, the steering exhibited a slight amount of cogging when comparing it to the DD2 in the other title.

It will be interesting to sample the wheels once again at the upcoming SimRacing Expo just to see if they are closer to production and to judge if there have been any changes to their initial feel in Landshut.

After a nice meal, Thomas’s speech, some antics on a rain-soaked and very dark runway involving a Mustang, Porsche and Mercedes rally car, not to mention a sprinkle of Go-Karts, the evening came to a conclusion.

It was great to be in attendance. My thanks to all who organized the event and for inviting me to join them there. 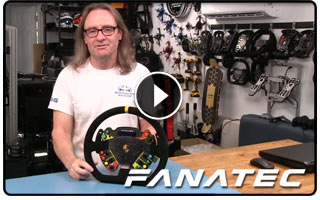