Reiza Studios has published the October 2022 Development update for the Automobilista 2 racing simulator. starting this December, the upcoming dev updates will only be published only in even-numbered months.

In this latest dev update, Reiza Studios founder Renato Simioni takes us behind the scenes of the AMS 2 development and brings us up to date with some of the upcoming content, features, and improvements that are in the works, such as the Racin´ USA Pt3 pack, a licensing deal to implement the Indianapolis Motor Speedway, the Spa-Francorchamps 1970 DLC, the release of the Corvette C4 GTP, and much more.

It´s been a while since our last catchup in August – the whole team got some much-deserved time off after the last of the V1.4.1 hotfixes, and since then we´ve been pushing hard to put together another great update for Automobilista 2, which is now just around the corner – a good time to catch up and share some news about what we have been working on!

First, a bit of housekeeping: from now on you may expect these dev updates to be published only in even-numbered months (next one being in December, then February 2023, etc.) on no specific day, and major game updates likewise (although we will continue to release minor updates in odd-numbered months for the foreseeable future) – the extra time will help keep these dev updates fresh and juicy, and the increased development cycle, in turn, allows us to deliver on more elaborate features while keeping the released game stable in between.

So let´s get on with it and check out what you may expect already in the coming days!

We are finally soon to wrap the package for Racin´ USA Pt3 – the last you heard of it was after we were contacted by IndyCar following the announcement of the Formula USA 2022 in the August Dev Update. While we still hope to get something worked out in the future, unfortunately, the license for the car is not looking to be resolved any time soon, so we have decided to roll Pt3 out without it. We will continue pursuing some arrangements for it to feature in future packs.

We do have positive news though, as we are finalizing a deal for the Indianapolis Motor Speedway, which we hope will join Auto Club and WTT already for an all-oval Part3 release.

The Brickyard needs no introduction – the host of the Indy 500 since 1911, the Brickyard 400 since 1994, and also the host of the USA GP through the 2000s and the IndyCar GMR Grand Prix since 2014 on its infield course has seen some of the best motorsports in history, with its relatively low banked, rectangular layout making the oval course itself a fairly unique challenge.

We still need to cover a few more steps before we can release this so it may be that Pt3 will only be officially released a few days after the next update – in this meantime, all users will be able to continue enjoying Auto Club and WTT “free trial” period – upon release, it will become available only for owners of Racin´ USA Pt3 & packages that include it.

Our Track Team has extended its stay in Belgium in recent months, first to deliver the freshly reformed 2022 version of the track, and since then turning the clock back to 1970 to wrap this long-awaited addition to the AMS2 track roster – the long, fast, dangerous original 14km Spa-Francorchamps that thrilled and scared drivers back in the day in equal measure.

Users have been anxious about this track as it had been already announced as a future addition to the Spa-Francorchamps DLC released in late 2020 – back then the plan was to model it after an existing mesh of the track from a partner, but further research demonstrated that no version of this track in a sim was ever close to being accurate and that if we wanted to do it justice we would need to start from scratch, which naturally considerably stretched its development.

As always though our track team was up to the challenge and hopefully made the wait worthwhile, as the result is by far the most accurate recreation of this legendary track, modeled after LIDAR data of the layout that´s still largely used as public roads to this day.

There are still bits and pieces coming together for it as we speak so the original RC release will not be quite 100% complete, but it will all come together in the days between that and the official release. The track will feature in two configurations (with and without the Malmedy chicane added in 1970).

Taking the opportunity for an update to another long-awaited project, the track team is also hard at work on Nürburgring 1971 which we expect to add to the Nürburgring DLC pack before the end of the year – this is another hugely demanding project that´s coming together slowly but surely, and ultimately to a ground-breaking result.

In more DLC news, users have been enquiring about the release schedule of the items remaining to fulfill the 2020-2022 Season Pass, so you may expect an updated schedule and more info on each item very soon – all we´re in for an exciting run of historic content in the upcoming months!

On the car front, we have the arrival of our first GTP car – this Corvette was developed by GM in partnership with Lola to compete in the IMSA series in the late 1980s. The real car was fitted with a variety of different engines, from turbocharged V6s to massive 10L V8s at the end of its life cycle – for the game we decided to stick with the 366ci 6.0L normally aspirated V8 outputting over 800 HP, making this car sound as fast as it looks!

It´s not all about the content of course, as we have many substantial improvements also incoming – first in this long list is the addition of low downforce variants for Group C & GT1 cars, featuring the aero configuration they ran at Monza, Hockenheim, and another track we are looking to add to the game in 2023.

On the oval front, since the V1.4.1 release we´ve noticed users experimenting with various cars other than the F-USA on the existing Speedways – unfortunately, as things stand, physics and AI need some specific work for classes to be better suited for oval racing, which means classes that don´t have those dedicated variants are not really working optimally. To atone for that, we selected a number of additional classes (Super V8, Brazilian Stock Cars, Copa Montana, Stock Omega, Stock Opala) to receive these dedicated oval variants so users can enjoy the ovals thoroughly with other types of cars.

We have also joined forces with @toniware to integrate his Radar HUD mod into our HUD system for better visualization of cars around the player. Here is a video preview of it in action:

Helmet Livery Customization didn´t quite make it in time for the V1.4.1 release, but it´s coming together now – by the next update users should be able to customize helmets just as is currently possible with vehicle liveries.

While Major Physics Developments will by and large be kept parallel between V1.4 and v1.5 as indicated in the August Dev Update in order to preserve gameplay consistency in the period in between, we do have some substantial developments, especially for cars that were still proving troublesome as of the last release, such as the F-Trainer, the Opala Old Stock The F-V10 Gen1, a complete physics revision for all karts and further minor fine-tuning for some other cars.

There are also some further developments to the Advanced Mechanical Damage Model, with several more classes now covered with this feature, improved replay fidelity of smoke effects, and revised engine power loss from wear. The longer-term (not yet for the next update) is the integration of wing and suspension stress-induced failures, as well as increased tire damage features. & limited tire sets are on the agenda.

We have some further AI developments coming up also, with special mentions to AI behavior when in draft (with AI now actively pursuing draft of other cars and suffering from turbulence when too close behind, which should lead to more realistic behavior in ovals) and AI pitstop strategies in longer races.

Also, not for the next update but hopefully in the near future, we are evaluating some valuable improvements to multiplayer prediction code which should lead to a more reliable and smoother Multiplayer experience.

Some further Quality-of-Life improvements arriving include improved support for Logitech, Fanatec & Simucube wheels, and a new option for motorsports rule presets, allowing users to customize all rules to a specific class with a single click.

Last but not least, we have gone bug-hunting to squash some pesky long-standing issues in this cycle – issues with performance in Time Trial Mode and occasional loss of driver aid settings in between Multiplayer sessions being a couple of the most significant.

Automobilista 1&2 + all DLCs Currently 50% Off on Steam

Associated DLCs, all with 50% off on Steam – if you haven´t yet got all items this is a good time to do so! The promo runs out on Monday, October 31.

That covers all we had to share at this point – look forward to V1.4.3 arriving as a Release Candidate in the very near future! 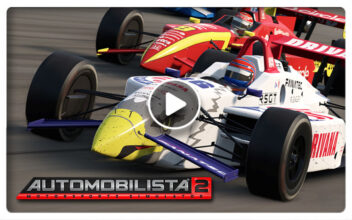