Comments 9 May 2016 In Forza Motorsport If the included pictures are no hoax, then it looks as if Turn10 Studios is getting ready to launch yet another expansion pack for Forza Motorsport 6 on the Xbox One.

Today, pictures that were supposedly snapped at a UK retailer show us a Forza 6 redeem code card indicating that a Forza 6 NASCAR Expansion pack might be in the pipeline. Turn10 Studios did not yet react on the leak, but a Microsoft representative seemingly confirmed the existence of the Forza Motorsport 6 NASCAR expansion but did not yet reveal any details.

The pictures of the UK redeem card reveal that the NASCAR Expansion will retail for 15.99 British pounds. This should translate to roughly 19.99 Euros.

The info text on the back of the download card reveals that the NASCAR DLC will feature 24 cars from the 2016 NASCAR series, a new “NASCAR World Tour” career mode where players have to race their Nascar stock car against a selection of vehicles from various motorsport classes. Furthermore, some new multiplayer events, and  some new display elements for improved drafting and car spotting are mentioned.

Forza 6 already features some NASCAR tracks such as the Daytona International Speedway and Indianapolis Motor Speedway. The download card also reveals that the NASCAR expansion will add the Homestead-Miami Speedway to  the Forza track list.

Interestingly, as of January 1, 2015, a company called DMi, Inc claimed it became NASCAR’s exclusive licensee for video games and digital entertainment. DMi, Inc president Ed Martin was a former employee of the original NASCAR game developer Papyrus and later on also worked on a host of NASCAR games with EA and Eutechnyx. With this in mind, it is unclear in which shape or form the Turn10 Studios/Microsoft tandem has acquired a NASCAR License.

Keep in mind that the NASCAR Expansion pack for Forza Motorsport 6 is not yet officially confirmed by Microsoft or Turn10 Studios. For all we know, this could just as easily be a fake. 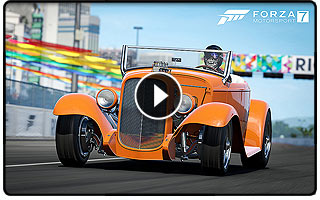