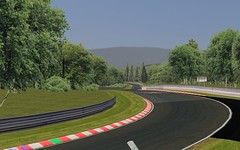 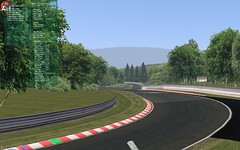 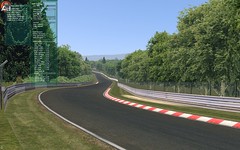 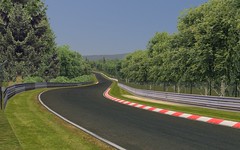 Pierre-André Leclair has released a new version of the original rF1 Com8 Nürburgring Nordschleife for rFactor 2.

Note that this track conversion is still a work in progress, and does lack some features and optimizations

WARNING: First, let me warn you. Performance might be worse for you than in previous versions. Remember that this is a 20km track, and as the track will have more and more eye candy its performance will go down… probably to a level worse than silverstone in the future. At least, I hope so, that would mean the goal is reached!

I wanted to make shadow groups and vis groups, but it will be done for the v1.0. It will require quite a bit of time to do properly.

So, there was a little performance increase coming from the better mesh (a whole lot of vert welded) but the curbs have a higher resolution now, and there are quite a bit more shadows, and the shadow out is greatly increased so there is little shadow pop in.

This is basically the setting that max users will enjoy. It is the same for high as well. Everything has been set to high and max. So if too slow, reduce to low or med.
The track mesh is now in a much better state. Drives a bit smoother, but it is still a bumpy ride.

Don’t ever expect this track to lose much of its current bumps, as it wont happens. I love how the track feels, it feels alive, and I think it represent well a segment in time of the Nords. The track may be smoother today, but its seen very rough days from what I can hear, and this track is clearly modelled around those time.

If you are losing controls because of bumps… drive differently.. I’m having fun with bumps actually, flying sideways in some corners 😛
Most of the materials have changed. After seeing a video of the automatic bmw earlier, I noticed how green the inside grass (between fence and track) really is. So it is now a bit brighter. The rest is basically the same.

I used the patch texture from limerock to replace the mowed texture from silverstone.
The curbs have been tessellated a second time, and now feels much better.

I went over many textures, and created norm and spec maps (after seeing a tutorial on youtube) for most fences, they now stand out a bit more.
All trees have been levelled to the ground, and re-arranged to prevent flickering.

The night lighting is now in, and on top of the moon light, there are a light coming from the gpk sign that is lit at night, and from the few lights on the side of the track.
The track now looks very good, to my taste at least.

I tried to have a quick shot at reflections but werent successful.
I would need help creating the alpha channel for my road texture. If somehow could explain to me what I must do to make a proper one, it would certainly help me.

I tried to look at the one from other isi track and make one for the many textures there are, but I dunno if it was my global plane that wasnt right, or the alpha channel, but the track wasnt looking right. Was mostly dull gray, with no reflection.

Well, I’ll stop now, cause my memory is failing me, at its nearing 3am, and I’ll let you download it and try instead!