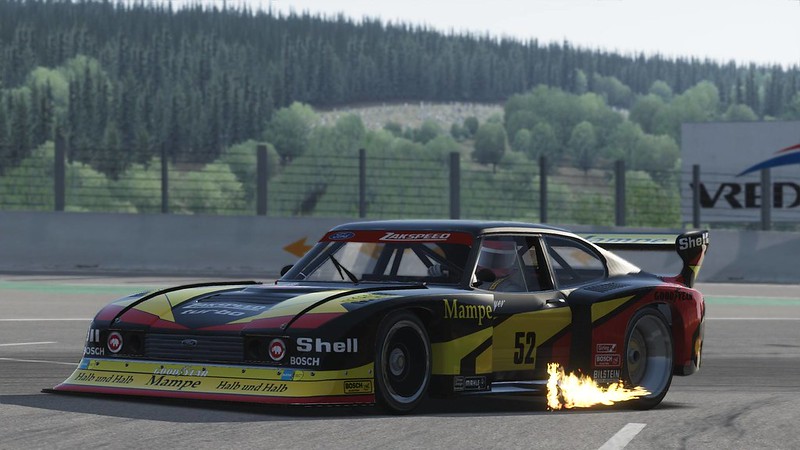 The screenshots show us the mighty flame spitting Zakspeed Ford Capri Turbo dressed in a range of famous liveries as used in the Deutsche Rennsport Meisterschaft in the 70s and 80s.

In the late 1970s, Zakspeed owned by Erich Zakowski, was the official Ford team in the German Deutsche Rennsport Meisterschaft (DRM) series. The team campaigned the highly-tuned Cosworth BDA-engined Group 2/5 Escort MkI/II race cars, that are best remembered in their black, red and yellow, Mampe-livery.

With the Ford Capri MkIII ready to be released in Europe in 1978, Zakspeed set out to race another car in the form of the Division 2 Zakspeed Capri Turbo that was powered by a Ford / Zakspeed  1,426 cc Cosworth BDA Straight 4 with twin KKK turbochargers and Garret intercoolers delivering 380bhp.

In 1980, Zakspeed campaigned a Division 1 side skirted wing-car Capri that was powered by a 1.7-litre twin turbo engine delivering 450bhp. In 1981, the LiquiMoly-sponsored Capri with Manfred Winklehock behind the wheel won the Division 1 championship.

The DRM Revival Mod will recreate the fast and spectacular DRM Cars that were raced from 1972 to 1985. The DRM Group 5 series was divided into 2 groups. Division 1 was made up by iconic cars as the Porsche 935 Turbo, Lancia Beta Monte Carlo Turbo and the Zakspeed Turbo Ford Capri’s with engines ranging from 2000 cm ³ up to 4000 cm ³ and Division 2 cars with less than 2000 cm ³ like the Zakspeed Ford Escort, BMW 320i.