A few staff members of the Kunos Simulazioni development team are attending this weekend’s ADAC Zurich 24 Hours of the Nürburgring Nordschleife.

During their stay, the Kunos Simulazioni team were invited to the Scuderia Cameron Glickenhaus team to have a look at the competing SCG 003C racer. Owner and former car collector James Glickenhaus has entered two SCG 003C prototypes to compete in the famous N24. The SCG 003C is the successor of the P 4/5 Competizione which is already available in Assetto Corsa.

Interestingly, today Kunos Simulazioni posted a Facebook article showing the car at the Nürburgring 24 in which they are hinting that the Scuderia Cameron Glickenhaus 003C will become part of the Assetto Corsa Simulator in the near future. We also included a picture where Assetto Corsa’s physics creator Aristotelis Vasilakos is showing us the car already in-game.

Furthermore, the Facebook article also revealed that in the next update the LaFerrari will feature updated physics, graphics, and a new sound set.

The car was already active in the 2015 German VLN race series, and will compete in this years 24 Hours of the Nürburgring Nordschleife. 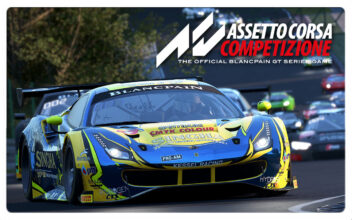