Reiza Studios has published the September 2021 Development update for the Automobilista 2 racing simulator.

As usual, the Dev update takes us behind the scenes of the AMS 2 development and brings us up to date with some of the upcoming content, features, and improvements that are in the works.

As of the latest build, Real Weather now also includes local environment temperatures – gone is the old overly generic built-in lookup tables, it is accurate for any location in the game, currently and for any date going back to January 1st, 1979.

The game now also packs the data from days between the original feature release in June to now. The next steps include improving the interaction between ambient temperature and solar heat with track temperatures and add real humidity and wind data.

The latest update also addressed a Physics error we´d made figuring out the intake manifold pressure model from SMS which led to throttle response most noticeable on some of the older cars – a small mistake with big consequences but properly sorted now.

Various new options have been added, such as damage scaling, enabling / disabling refueling during pitstops, and whether to run an extra lap in timed races once the clock has run out.

The Championship Editor is now largely out of Beta state and working well, even if we still have plans to further develop with some additional options and features.

On the Content front, a race version of the Corvette C3 has joined the party as a sparring partner to the Porsche RSR, with the regular road car adding some muscle to the vintage class, demonstrating the grid all classes have the potential to expand with some fresh contenders as we progress. More to come here!

For our late September update, we have another exciting classic car arriving in the form of the BMW 2002 Turbo – another boost to the Vintage Touring Car class.

On the AI front, the extended developments to AI personalities hinted at in the last dev update haven´t quite made it in time for our latest release but it should hopefully make it in time for the September update; we are also working on improving their blue flag behavior which should add good value to multiclass racing against the AI.

We are also working on several UI updates, including a revamped leaderboard screen in-session, an early mockup preview of which can be seen below – more info to be added here, including a column for current tire selection.

Monza on the Way!

With motorsports temples such as Hockenheim, Silverstone, Nürburgring and Spa-Francorchamps already represented in our Premium Track Pack, the fifth track could only be one: the Autodromo Nazionale di Monza, host of the Italian GP since the very first world championship in 1950 with the sole exception of 1980, and one of the only four venues from that first season still part of the F1 calendar – all of which now to feature in AMS2!

The historic value of Monza goes well beyond F1, as a regular staple on the calendar of the most prestigious international racing series through the decades. The modern track remains a unique high-speed challenge to this day, with the long straights being broken up by tight chicanes putting a premium on horsepower, braking precision, and traction.

Like the previous premium tracks, the Monza DLC will feature the modern version of the circuit along with a few historical variants representing this classic venue through the decades, the dauntingly fast 1971 layout (the last one before the introduction of chicanes), as well as the one combining with the old oval and its insane banking, which even though hasn´t been raced in anger for decades now remains mostly intact to this day as a testament to the bravery of drivers from yesteryear.

The Monza DLC will also feature the 1991 layout with the original high-speed Lesmos offering almost no run-off area before their 1994 sanitization, as well as the double Retiffilo and faster Della Roggia chicanes from pre-2000 reform along with their challenging high curbs.

All versions of Monza from this pack are expected to arrive by the end of September, with the modern version possibly (but not surely) seeing a slightly earlier release at the Italian GP weekend.

While the Monza DLC release will fulfill the original five planned premium track releases, the pack will still be expanded with a sixth bonus track, with early 70s historical variants of Spa and Nürburgring also still to be added to their respective packs – all of these however now on the schedule for 2022.

Historical tracks belong to historical cars, and with Monza coming up this seemed good timing to expand our F-Retro line-up into a third generation to offer something with long legs to stretch over those long straights – luckily, we have another set of officially licensed, historical GP cars from the turbo era coming up with the right stuff for the job – can you tell what they are from these early 3D previews?

Further Down the Line

Looking a bit further into the future for some foresight into two eagerly anticipated developments – the Racin´ USA Pt2 DLC is currently in the works and expected for a late November release (some news on what you may expect content-wise in our next dev update).

Our Multiplayer Rating System is also finally coming up the pipeline and expect an end-of-year release along with some other Multiplayer developments, with a public Beta possibly arriving with that same update – all in all, November should be a big month for AMS2, with some other substantial improvements due to be concluded within that same timeframe.

We still have plenty incoming before that, however, including an exciting AMS2-based project we are producing alongside the Brazilian branch of one of the biggest car manufacturers in the world – that however is a topic for the next dev update!

That wraps the news for this cycle – see you all again next month! 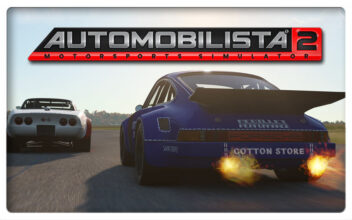