It is clear that Reiza Studios Automobilista 2 title is rapidly becoming the most underestimated racing simulator on the market.

Today Reiza Studios released the anticipated V1.4 update featuring an impressive list of major improvements, new features, new cars, and as a bonus, a 2022 updated version of the Belgian Spa-Francorchamps circuit bringing the virtual version on par with its recently updated real-world counterpart. The track is available as a free addition to the existing Spa-Francorchamps DLC.

The official release of the Racin´ USA Pt3 DLC has been delayed while Reiza is working on some new items for the pack. However, the two ovals already confirmed as part of Racin´ USA Pt3 DLC along with all oval variants of F-USA Gen1-3 from Pt2 and the Daytona track from Pt1 are now available as a free trial for all owners of the base game. The trial will run until the aforementioned content will become part of the official Racin´ USA Pt3 DLC release.

For more info and details regarding today’s release, check out the included overview video and the changelog below. 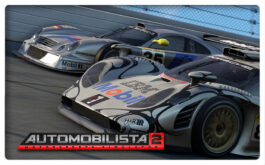